Campaign builds that used to take hours or days to build now takes minutes. Upgrade yourself with SpeedPPC.

Find out how SpeedPPC does the work of 3 employees

If you want great Quality Scores, high click-through rates and good conversions, you can’t take shortcuts. Your campaign has to have a high degree of relevancy between the original search term, the ad, and the landing page.

Manually creating individually targeted ads and landing pages for all but the smallest campaigns is time-consuming, tedious, boring and it sucks.

That’s why we built SpeedPPC.

SpeedPPC automates the most tedious and laborious parts of building targeted campaigns, so you don’t fry your brain copying, pasting and tweaking hundreds of ad groups.

You can now build high-performing, super-targeted campaigns in less time than it would take to create a ho-hum campaign by hand.

Better quality score. Lower costs. More clicks. More conversions. And you can do it all in your lunch break. Twice.

How fast is SpeedPPC, really?

Let’s look at building a simple campaign for accommodation in every US city. Here’s what it would take to do it by hand, versus using SpeedPPC. 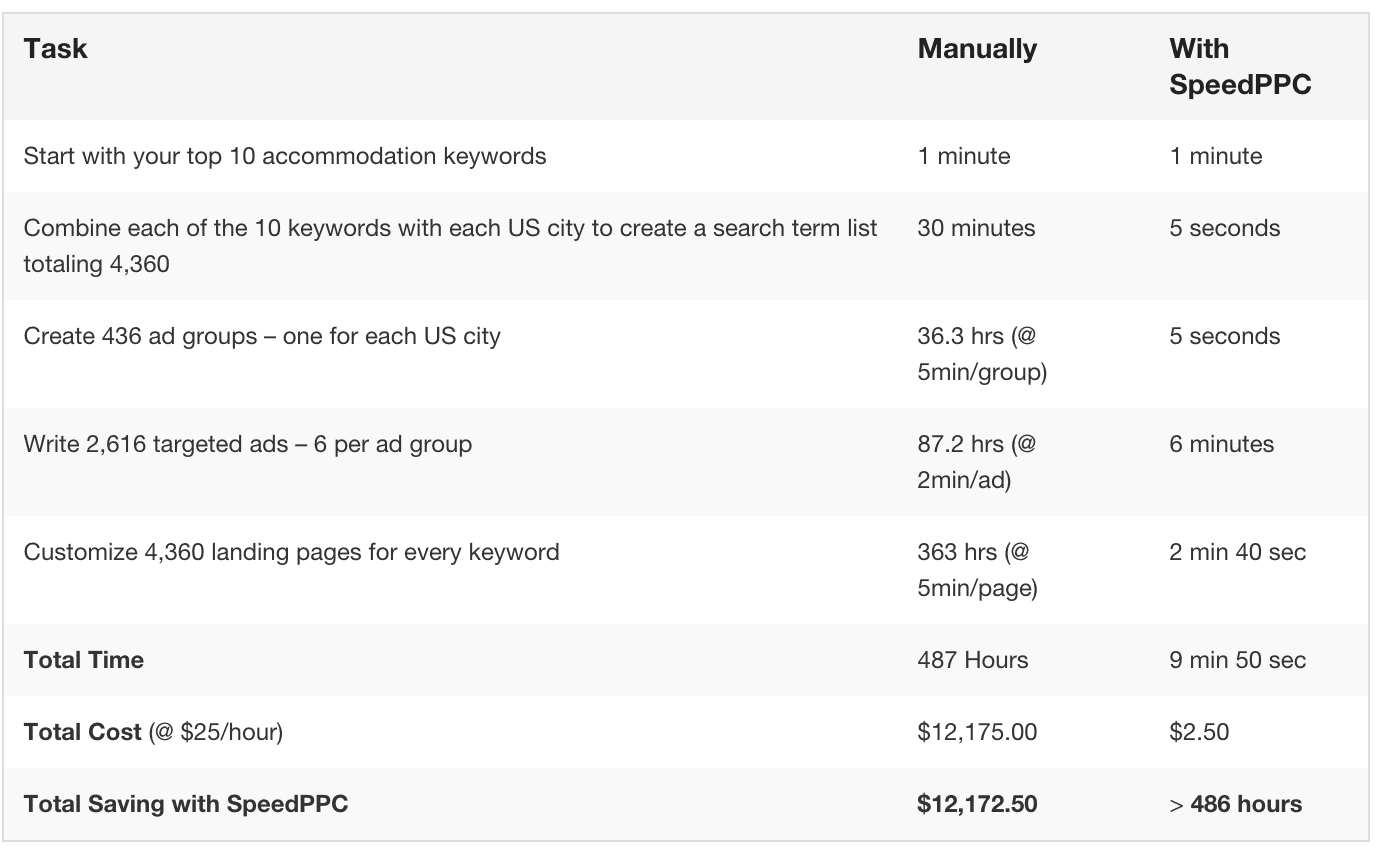 That’s an accommodation campaign for every city in the United States, done in under 10 minutes!

In reality, most people wouldn’t spend 487 hours creating super-targeted campaigns by hand. They would spend 4 hours creating a generic campaign, and see less than astounding results.

With SpeedPPC there’s no need for compromise. You can have a highly-targeted, high-performing campaign in minutes.

See the results in your back pocket

A well-built, targeted campaign gives you better profit margins, which means more freedom to scale things up for more traffic and more sales.

SpeedPPC helps you target thousands (and thousands) of more specific long-tail keywords, which all add up to big traffic at a fraction of the price.

It’s a beautiful, beautiful snowball effect, and it all comes from just doing it right.

Why not give it a try today?

Take SpeedPPC for a spin for 14 days free

Hits from the blog

Blog posts that will make all your wildest PPC advertising dreams come true.

When is comes to PPC tools, the list is as long as your arm! Each with their own killer

Negative Keywords…should you use them?

YES! And here's a few reasons why… There are many reason why your keyword strategy should included negative keywords. Negative

Why use Single Keyword Ad Groups?